Saltwater Crocs: Showing How Dinosaurs Are Evolutionary Pansies Since 200,000,000 BCE

In the waning years of the World War II Pacific campaign, British Marines and the 36th Indian Infantry Brigade landed on the shores of Ramree Island, Burma, after hours of aggressive naval bombardment. A swampy mud-soaked coastal island housing a wide variety of deadly wildlife and diseases, Ramree was key to gaining an Allied foothold on mainland Burma and reversing the spread of Japanese aggression in the region. The few thousand Japanese forces entrenched on Ramree repelled the Allied invasion during the initial weeks of heavy fighting.

January 26th, 1945, the battle turned when a force of about 1,000 Japanese defenders was routed by Allied forces. Surrounded on three sides by enemy units and hoping to rejoin the larger Japanese battalion on the other side of the island, the retreating Japanese opted for the most direct path; a beeline through the thick mud of a dense mangrove swamp. Their retreat was marred not only by the pursuing Allies but also by starvation, dehydration, mosquitos, scorpions, snakes, and one of the most infamously prolific people-murderers outside of the human species: saltwater crocodiles.

This is the last thing I’d want to run into at night in a warzone after being shot at for the past few weeks. Image source: unknown

It doesn’t take a vivid imagination to figure out that saltwater crocodiles are nothing short of gifted killers. At up to 22 feet long and more than two tons, they’re the largest reptile alive today. Saltwater crocs inhabit salty, brackish, and some fresh waters from the Indian peninsula through northern Australia and Southeast Asia, historically spanning northward to Japan. These waters are some of the most densely-populated human areas on earth, meaning the rate at which crocs and people meet face-to-face is higher than more fear-inspiring predators like sharks, hippos, bears, lions, tigers, wolves, cheetahs, dragons, mermaids, and unicorns.

Saltwater crocs, or salties, are primarily ambush predators, meaning they lay elaborate traps (jaws) in high-traffic areas (any volume of murky water larger than 5 liters) and wait for unsuspecting prey (anyone that will be dearly missed) to wander closely by (within 6-10 miles). Saltwater crocs in particular have the widest diet variety of any living crocodile. Crocs are typically apex predators in their communities, meaning they have the ability to catch, consume, and digest pretty much any other animal species from lower levels of the food web. Their prey includes smaller animals such as fish, crustaceans, and birds, but they’ve also been documented feeding upon larger mammals like deer, antelope, domesticated livestock, and humans. Given their size and musculature, it’s a wonder that saltwater crocs are surprisingly not voracious eaters and can go for weeks between meals. Let that thought give you comfort as you’re devoured alive.

Not only do salties eat nearly anything that moves, they also strike with deadly aggression.

Their bite force is the highest ever recorded; a large Australian saltwater croc broke the record with a bite force of 36,000 newtons. By contrast, this is about 40 times the force a human exerts and almost 8 times that of lions, tigers, and  hyenas. This number even rivals that of another famous predator, breaking into the lower estimates for that of T. rex. Scientists studying the evolution of crocodiles noted that the skull took on its characteristic shape, musculature, and bite before the emergence of other croc-like traits like body size, shape, joint structure, and limb placement, indicating that the bite force of crocs was a primary driver of crocodilian evolution.

On the other hand, saltwater crocs have very poor opening strength, and according to the Wikipedia article on their bite musculature, a few layers of duct tape can hold a saltie’s jaws shut. I’m not trying that anytime soon.

Once saltwater crocs get a hold of their prey, it may perform a famous behavior called the death roll. Keeping their strong hold on their prey, the croc will spin until the animal becomes separated or until the croc no longer detects movement. Most theorize that the death roll is largely an attempt to drown terrestrial prey, making them easier to consume. Others speculate that the purpose of the behavior is to rend torso from limb and produce manageable portions for easier digestion. Either way, the death roll is something with which the retreating Japanese on Ramree Island became all too familiar.

British scouts documented the horror the Japanese experienced in their retreat across Ramree. Screaming and desperate splashing were common sounds heard by the Allies in the night, sometimes punctuated by the characteristic sound of Japanese gunfire. Many speculated what horrors befell the dehydrated, starving, mosquito-plagued Japanese. Few outsiders witnessed and documented the event. Among the British forces scouting the Japanese retreat from outside the swamp was naturalist Bruce Stanley Wright. In his 1962 book Wildlife Sketches Near and Far, Wright elaborates on the event:

“The crocodiles, alerted by the din of warfare and the smell of blood, gathered among the mangroves, lying with their eyes above water, watchfully alert for their next meal. With the ebb of the tide, the crocodiles moved in on the dead, wounded, and uninjured men who had become mired in the mud.

The scattered rifle shots in the pitch black swamp punctured by the screams of wounded men crushed in the jaws of huge reptiles, and the blurred worrying sound of spinning crocodiles made a cacophony of hell that has rarely been duplicated on earth. At dawn the vultures arrived to clean up what the crocodiles had left…Of about 1,000 Japanese soldiers that entered the swamps of Ramree, only about 20 were found alive.”

Though many admittedly doubt the accuracy of Wright’s reported number of casualties, the statistic has earned the Guinness World Record for “most fatalities in a crocodile attack”. If Wright’s numbers are accurate, Ramree would be the deadliest attack by any animal on human beings in recorded history.

Few doubt the capability for saltwater crocs to bring that degree of torture upon humans. Many attacks like these occur in remote regions among populations of humans that fail to reliably collect attack data. Much of what we know about croc attack numbers comes from Australia where news reports and eyewitness accounts are more accurately described and distributed to the public. In Australia’s Northern Territory alone, 18 lethal croc attacks have taken place since 1987. Across all of Australia, the rate of deadly attack has skyrocketed from one every two years in 1971 to seven times that number in 2013, totaling 99. Of those, 27% were fatal, a low statistic compared to the country’s neighbors. In nearby Sumatra, 107 people have been attacked since 2007, almost 50% of which were fatal. 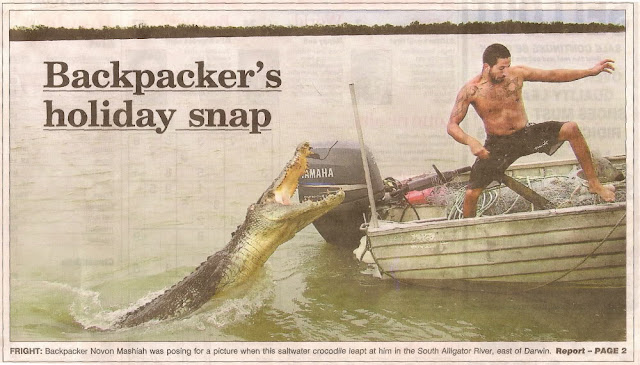 One such attack was made famous by Hugh Edwards in his book Crocodile Attacks in Australia and made even more so by Bill Bryson in his entertaining travel novel In a Sunburned Country. In 1986, many moviegoers were entranced by the release of Crocodile Dundee, inspiring droves to visit the Australian wilderness. One such traveler was 24-year-old American model Ginger Meadows. Aboard the luxury yacht Lady G, Meadows and her newly-earned Australian friend stopped for a swim near the waterfalls at the beautiful King Cascades. The two women were quickly pinned in the water between a croc and a steep cliff. The girls began shouting, throwing their shoes, and tried to wait out the croc, but nothing could deter it. Meadows, a strong swimmer, attempted to make a break for the nearby embankment but vanished in a cloud of splashing in seconds. Caught in a death roll, Meadows looked to her friends desperately, but no one could do anything to help before she vanished. Her body was found floating and armless two days later.

The King Cascade falls, the site of the vicious crocodile attack on American model Ginger meadows in 1987. The attack occurred in the alcove left of the falls. Image source: Tripadvisor.com

Cases like these are hardly solitary. In 2003, a group of three adult friends were repairing an ATV in the Northern Territory when a crocodile fatally attacked one of them and chased the other two into a tree for 22 hours. In 2009, a 5-year-old Queensland boy was eaten in his own backyard trying to protect his new boxer puppy. In 2013, a New Zealand man was trapped alone on an island for two weeks when a crocodile attacked him each time he neared his boat. Last year, a 61-year-old man was snatched from his fishing boat while his family had their backs turned.

It must be said that a majority of attacks are non-fatal. It’s a common occurrence, especially in the Northern Territory, for locals to boast about close encounters with crocs. Sometimes, bait or cleaning buckets attract crocs to wayward limbs. Campsites, public spaces, or private residences located adjacent to croc habitat also can contribute to croc encounters. Excessive alcohol has also been tied to many attacks. Other times, the crocs attack objects like boat hulls, motors, fishing gear, and other inedible objects completely without warning or agitation.

Though it’s hard to find any heart-warming aspects of the saltwater croc’s story, such things do exist. For one, a collection of Australian laws were passed in the 1970s that outlawed the unregulated trade of saltwater croc skins, a large contributor to critically low crocodile numbers. In the first ten years, the population exploded from 4,000 to nearly 30,000 animals, and today the number may be as high as 150,000 in the Northern Territory alone. To date, the recovery of croc populations from near extinction is the most successful predator conservation program in history.

Though saltwater crocs are among the most aggressive, deadly, and fearsome species in the animal world, they have also fascinated millions. From Steve Irwin to Mick Dundee, the raw power of saltwater crocodiles appeals to man’s primal urges of dominance and aggression. Crocs remind us of a by-gone era where reptiles the size of automobiles waged war on planet Earth. Perhaps that’s why we’re so entranced by them. Perhaps that’s also why we fear them so.